You can however take a good look of the extremely advanced nuclear boring machines that melt through rock at 5 mile per hour, creating the tunnels for high speed trains connecting these underground cities.

Since the 1950?s, the US Government has had nuclear powered tunneling machines. They were patented in the 1970’s (US Patents
#3,693,731). As it burrows through the rock hundreds of feet below the surface, the Subterrene heats whatever stone it encounters into molten rock, or magma, which cools after the Subterrene has moved on. The result is a tunnel with a smooth, glazed lining,  somewhat like black glass, which is also apparently strong enough that it doesn?t even require reinforcing of the walls. It was  featured in OMNI magazine, Sept 1983, p80. I happened to see a picture of (what I assume is) one of these machines in a UFO  magazine, but at $15, I wasn’t going to (let alone couldn’t afford to) buy it. Then I was visiting a friend and he showed me the  http://www.wierdpics.com website, and lo and behold, there was the picture.  Hmmm, what would the US Air Force be doing  tunneling deep under the ground? So, with the above picture and the US Patent Office patent, I think that adds up to  incontrovertible evidence that these things are real. And further to that, it is highly likely that the claims of underground bases and  tunnels across America (if not the world) are indeed true.

Here’s a pic of one photographed in Denmark. It appears that there is a  high probability then that an tunnel now exists under the Atlantic Ocean connecting America to Europe. 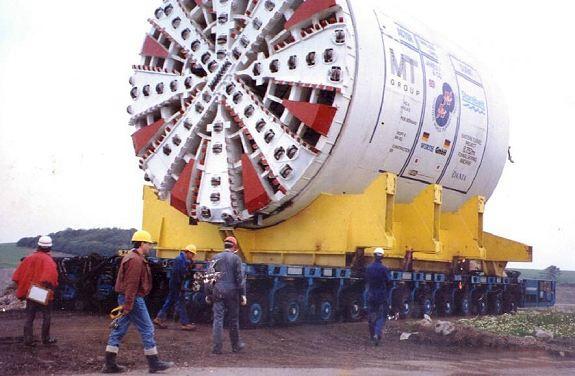 From http://www.wic.net/colonel/!subdril.txt (dead link)
(now defunct site due to the Colonels death).

Robert Salter, of the RAND Corporation, has suggested building a subway from New York to Los Angeles magnetically levitated above the tracks. The trains would zip through the evacuated tunnels at speeds faster than an SST, crossing the country in less than  one hour. Building such a train presents no special technological problems, but the cost of tunneling from coast to coast would.  To  be economically feasible, engineers would have to develop a new way to dig. The federal government’s Los Alamos Scientific  Laboratory, in New Mexico, however, may have an answer to this challenge. Called the Subterrene, the Los Almos machine looks  like a vicious giant mole. The beauty of the Subterrene is that, as it burrows through the rock hundreds of feet below the surface, it  heats whatever stone it encounters into molten rock, or magma, which cools after the Subterrene has moved on. The result is a  tunnel with a smooth, glazed lining.  For power, the Subterrene can use a built-in miniature nuclear engine or even a conventional  power plant. NOTE: I have seen this machine, and watched it in action. Normal rate of speed is approximately six and one/half  miles per hour depending on Type of rock, sand etc…………………Col. Wilson

NOTE:  This is another example of an advanced technology for mass transit denied the public because of the disruption to status quo institutions, like Big Oil. – CR

In regards to the underground boring machines I have a story to tell. In Nov. of 1992 I went to work at the Engineering office of the
Superconducting Super Collider Laboratory in Waxahachie, TX., which is about 30 miles south of Dallas. While there I helped design the Matching Section and RF Drive Loop Assembly of the Linear Accelerator used to focus the Proton Beam for there travel down the 50 mile oval.

When I started working there they had already started there boring under the ground. I never was able to get out to the hole but saw
pictures of it and talked to people who worked down there.

The boring machines at that time were the largest in the world. I don’t recall the size for sure. There were two of them and they were put down two different holes in pieces and assembled below. After there 50 mile oval was cut they would turn them outward  and there they would make a grave for them. I do know that they were down 200 feet. They were also planing to cut under one of the big lakes in the area.